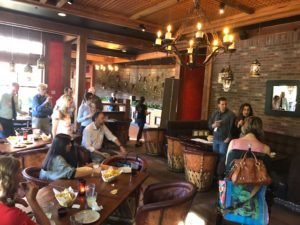 RPA’s Summer Social and Fiesta was held on Thursday June 7, 2018 at the La Rosa Tequileria and Grille in downtown Santa Rosa.  For thos
e who work in the central area of our community, it was a convenient place to stop by after a grueling day of work as a psychologist.  La Rosa gave us a private area including  a porch with two tables outside, so we had plenty of room to eat and socialize.  The atmosphere was enhanced by the appearance of RPA’s new signage (thank you Annie Babin).    The street tacos got excellent reviews as did the guacamole.  Drinks, both alcohol and non, were plentiful.

By loose count (not up to research standards), the event was attended by 30 people, including several non-members, as we invited RPA members to bring along colleagues. The atmosphere was comfortable and casual, with of course some work talk (networking some would say), and some just social banter.   President Naber gave a short speech noting the accomplishments of RPA and pushing for more psychologists to be involved in their profession’s groups at local and state levels.   Feedback is welcome; the board’s recommendation was to use that facility and timeline again, possibly next summer.