When All Else Fails..Adopting a Pet Can Help With Depression

When All Else Fails..Adopting a Pet Can Help With Depression 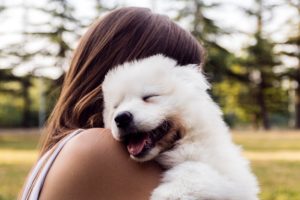 “For these people with depression, all treatment approaches had failed, but then they adopted a pet …” by Christian Jarrett.

For people diagnosed with what’s known as “treatment-resistant major depressive disorder” the prognosis is not good – the low mood and emotional pain for these individuals has not lifted even though they are on a combination of antidepressant medications and may also have participated in psychotherapy.  However a glimmer of hope comes via a research group in Portugal who reported recently in the Journal of Psychiatric Research that adopting a pet “enhanced” the effects of anti-depressant medication for a significant minority of their participants with previously treatment-resistant depression.

Jorge Mota Pereira and Daniela Fonte at the Clínica Médico-Psiquiátrica da Ordem in Porto recruited 80 outpatients with severe treatment-resistant depression and invited them to adopt a pet as part of a study into the effects of pet adoption on depression. Thirty-three of them agreed to do so (20 adopted a dog or dogs, 7 a cat); another 33 who declined were allocated to form a control group.

All the participants were assessed for their depression symptoms and general functioning at baseline and then again at 4, 8 and 12-week follow-up. Thirty individuals in each group successfully attended all the required assessments.

The main finding is that by the end of the study (at the 12-week assessment), just over a third of the pet-adoption group had remitted – that is, their scores on the Hamilton Depression Rating Scale and the Global Assessment of Functioning Scale had reduced to the point that their problems were now considered only mild.

By contrast, none of the control group had entered remission or in fact showed any signs of change in their symptoms at all.

These improvements in the pet group actually began manifesting by week 4 follow-up, suggesting the apparent benefits of pet ownership were rapid.

Pereira and Fonte said that looking after a pet involves “a strong affinity and companionship that strongly contributes to mental health” and that their results show that people with treatment-resistant depression “that are willing to have a pet should be encouraged to do so”.

A major weakness of the study is that it depended on participants volunteering to adopt a pet (rather than on random allocation to the pet adoption condition) – so, although pet-adopters and the controls were matched for baseline depression symptoms, there may have been other ways that they differed.

For now, Pereira and Fonte speculate that the therapeutic benefits of adopting a pet may arise from the responsibilities involved acting to counter the loss of motivation and pleasure associated with depression, and also from the social contact that arises through walking the pet or meeting other pet owners.

The article is online at: